Download and print for signing Appendix A, Appendix B, & Appendix C

Schedule to be developed after August 31 and published September 6, 2022.

The following are team entry requirements and policies for teams to review before they decide to enter a team in the 2022 Kino Baseball Fall League program.

The policies and requirements that are outlined are to ensure that the players, coach, and parents fully understand to what the expectations are for competing in the Kino Baseball Fall League.

The Kino Baseball League reserves the right not to accept any team that does not meet these requirements.

If you have a team that is looking for development, then possibly the Little League Fall Training and Development (TAD) program may be best suited for your players.

We wish to assure that every young athlete has the opportunity to play at the skill level that they are comfortable with the ability to enjoy playing the game. Nothing is more discouraging than having a team that needs further development playing in a division with teams that have more playing experience in a competitive setting. The results are never positive.

Teams that play in the Kino Baseball Fall League play for championships.

Coach is to email the league at [email protected] noting interest in what division they wish to play in.  This does not guarantee a spot in the league until the following steps are accomplished:

The entry fee covers the cost of:

Using profane language, doing damage to equipment, kicking dirt, physical contact with an umpire, non-stop talking to the umpires regarding balls/strikes, judgment related calls, unsportsmanlike conduct of any kind are causes for an individual getting ejected from a game.

The policy of Kino Baseball League regarding conduct is as follows:

The permits and contracts for fields from the city, county and school districts require the league to be responsible for the safety and security of the players, coaches and spectators that attend games.

Coaches are responsible for controlling their spectators.  If the umpires request coach’s intervention with any spectator, it is fully expected that the coaches will assist.  Failure for a coach to assist, the umpire has full authority to eject the coach from the game.

Spectator(s) can be banned from a public park if their conduct becomes a detriment to the safety and security of the players, coaches, umpires and those spectators around them. 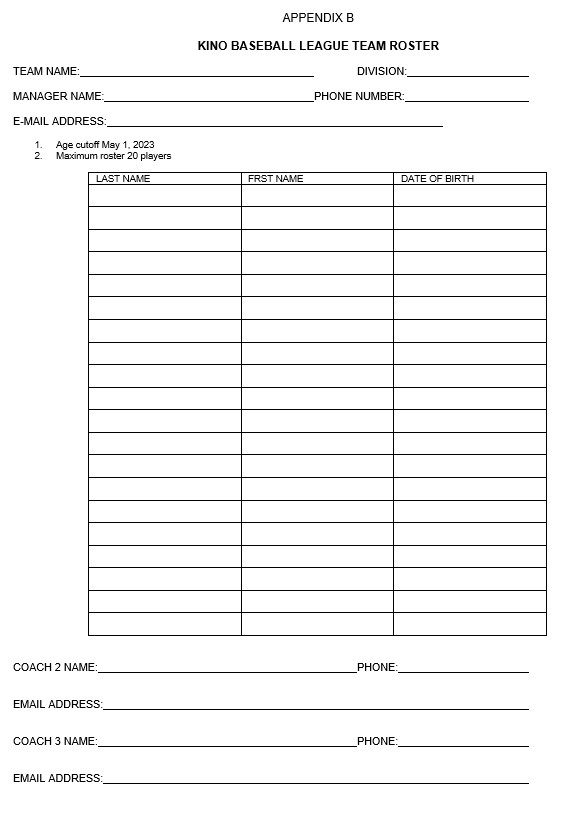 To fill out roster form, download and print PDF.

By my signature below, I certify that information on the team roster to participate in the Kino Baseball League is true and correct to the best of my knowledge.

I understand and acknowledge: